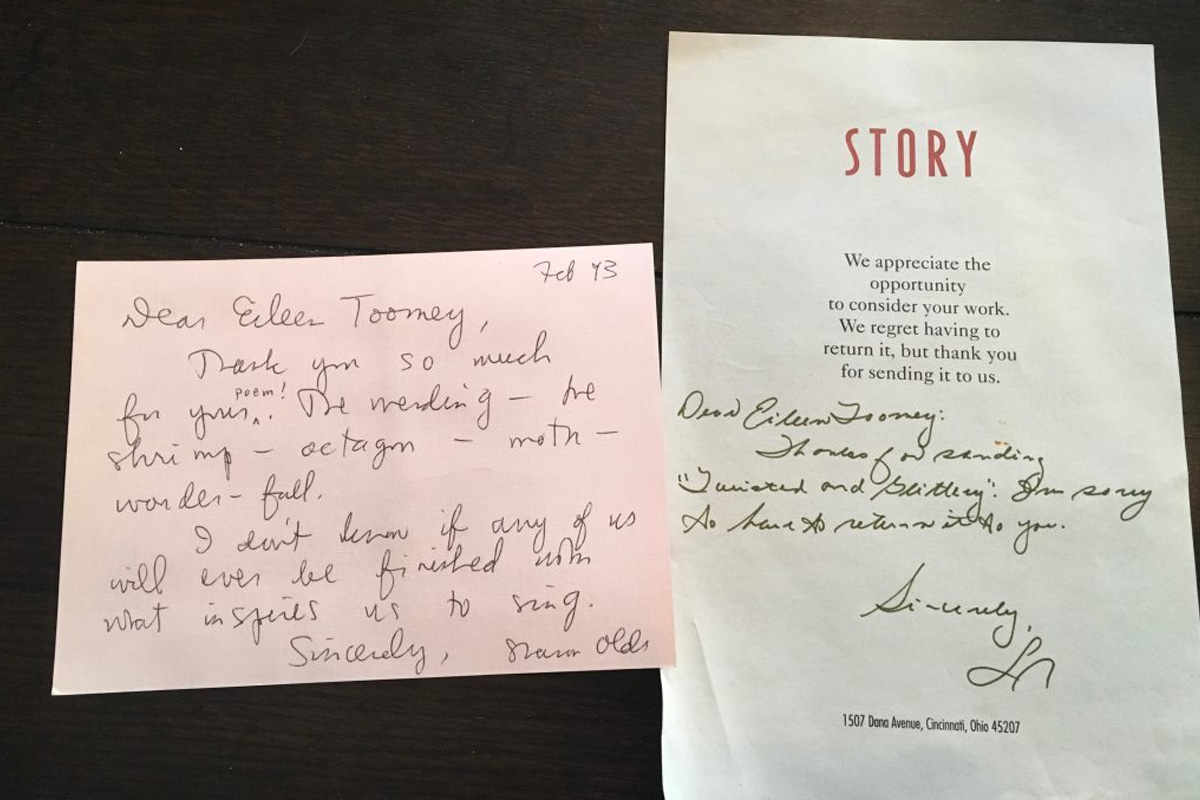 At eight months’ pregnant, the trip from my apartment to the mailboxes in the lobby felt long. Every day, I trudged down the foil-wallpapered hallway in flip flops because my feet were swollen, opened the wrought-iron door, and took the elevator down three floors. I was 27. My husband and I had just moved to New Jersey from Baltimore where I had finished my BA in English. I thought of this time as my “last ditch effort” to become a published author before the baby came. I had a short story and some poems that my favorite professor said were ready to send out. Without stressing too much, I wrote my bio: Eileen Toomey has no previous publications, sent out my stamped, self-addressed envelopes, and then continually checked the mailbox, waiting for a reply.

My first rejection came from Story Magazine, which, in its second life (revived by Lois Rosenthal, a famous publisher), was very highly regarded. I received a form letter without a personal salutation: “We appreciate the opportunity to consider your work. We regret having to return it, blah, blah …” But underneath, in that beautiful handwriting of my parents’ generation, was: “Dear Eileen Toomey: Thanks for sending ‘Twisted and Glittery.’ I’m sorry to have to return it to you. Sincerely, LR.” It was nice that someone wrote me a note, but a rejection is a rejection. I felt the pang, the gut reaction that I still have when I get a nonacceptance, but I moved on.

Having just joined a writing group, I brought the note to our next meeting. “My first rejection,” I announced, not knowing who LR was. Someone in the group gasped, “LR! That’s Lois Rosenthal, the publisher! That’s great!”

Form rejections began filling my mailbox from Sassy, Seventeen, The American Poetry Review, The Antioch Review—I aimed high! When I opened the mailbox door, I knew the answer immediately because the envelopes were so thin. My last rejection for “Twisted and Glittery” came from Another Chicago Magazine. The printed paragraph started: “We’re sorry to have to resort to this impersonal form, but …” The text was crossed out and beneath it was written: “Good details here, but not enough beyond the somewhat sensational events to satisfy us—still, a good story; we’d be glad to read others.”

At the time, I was reading The Father, by Sharon Olds. Inspired, I wrote a poem about my own dad, titled, “Dear Sharon Olds.” Pre-internet, I don’t remember where I found her address, but I impulsively sent Sharon Olds a copy. About a month later, I received a handwritten response:

Thank you so much for your poem! The mending — the shrimp — octagon — moth — wonder-full.
I don’t know if any of us will ever be finished with what inspires us to sing.

That was 25 years ago. I don’t know what I did with the original poem, and even though they sound great, I don’t remember the shrimp, the octagon, or the moth. The mending stayed with me. It was a moment where I sat on the couch with my father who was dying of cancer, both of us were in our pajamas, and he was sewing a button on my mother’s blouse. The fact that this famous poet read my poem, thought about it, and then answered me, filled me with hope.

I stowed my story, my note from Sharon Olds, and my form rejections in a box in the basement that was quickly buried under boxes of baby items.

In 2016, at the age of 50, I took the Emerging Writers class at Project Write Now with Allison Tevald. I wrote a poem called “Cattle Trucks.”

Allison said, “The Museum of Americana has a call for submissions about modes of transportation. You should submit!”

The internet has made submitting much easier. I signed up on Submittable and faced writing the dreaded bio again: Eileen Toomey has no previous publications.

To my surprise, my poem was accepted! I was hooked. It felt like I won the lottery. I knew the next time I submitted, I’d actually have a credit to list in my bio.

I stumbled upon a writing contest for personal essays judged by Leslie Jamison. I didn’t quite know what a personal essay was. How was it different from a regular one? So I looked up Leslie Jamison’s The Empathy Exams and used the title essay as my guide, learning about the blending of the personal and the historical. I didn’t win the contest, but I wrote a decent essay. After revising, I submitted it to The Eastern Iowa Review and it was accepted!

Now I have 31 rejections and six acceptances for publication. In many cases, almost 20 percent is not a great average, but for a writer, I think I’m doing okay. It’s a process, and even though I initially feel bad about every rejection (in my mind I always think, “your loss!”) it just means I’m actively submitting. What doesn’t kill me only makes me stronger—and a better writer!

I had forgotten about the box until we cleaned out the basement last fall. When I found my old rejections, I had to laugh—here I was at 52, writing about the same things! I had just received an encouraging rejection about an essay based on events in “Twisted and Glittery” from Another Chicago Magazine. They couldn’t accept it, but asked me to send more work their way. “Dear Sharon Olds” over the years morphed into “He Sleeps in My Room” and will be published this summer in 50/50 Poems and Translations by Women over 50.

When I open my email, I’m never sure what I’ll find. I still get that pang in my stomach when I’m rejected and the flutter when I receive an acceptance. Merely starting the computer is not the same as taking the elevator downstairs in my flip flops and turning that mailbox key, but the emotions are similar. I’ve had some great correspondence with editors and I’m always grateful for their time just like I was with Sharon Olds. Every day I remind myself—just because I might hear “no” today doesn’t mean I won’t hear “yes” tomorrow.

Eileen Toomey is a member of Project Write Now’s Writers Institute. Her essays have appeared in The Eastern Iowa Review, Fish Food Magazine, and The Rumpus. She has had a poem published in The Museum of Americana, and will have poems appearing this summer in The Tishman Review and in 50/50 Poems and Translations by Women over 50.