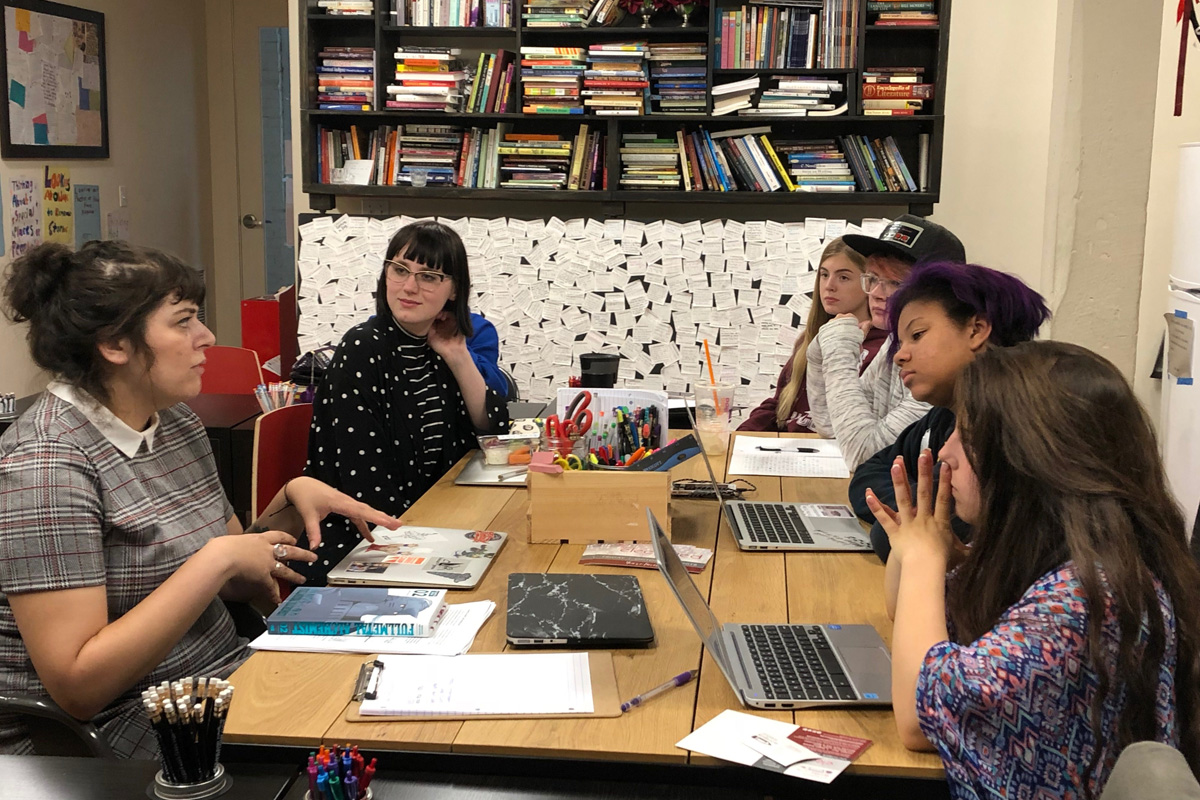 Discover your voice and make meaningful friendships! Our Teen Summer Workshops (for 11-14 year olds) provide students with an intensive, enriching writing experience that not only fosters open creative expression but also builds confidence and strengthens communication skills in a safe, supportive environment.

We would love for you to join us, whether you’ve been writing for years or just want to be part of a unique creative process.

We spoke with Tara Tomaino, who is teaching our “Graphic Novel Writing” summer camp (August 12-16, 1 to 4 p.m.; ages 11-14) to find out why she is so passionate about graphic novels.

PWN: What do you think about the movement and attention the graphic novel genre is finally getting?

TARA: I think attention—positive or negative—is vital for anything to flourish, and not only flourish, but to gain a certain respect within a community. Since their inception, comics, and subsequently, graphic novels, have always been deemed a childish and “nerdy” hobby. Recently, they have begun to see positive respect. Some of this has to do with the overwhelming attention both the Internet and movie industry have dedicated in the past 10 to 15 years toward MASSIVE, billion-dollar pop culture industries, such as Marvel or Japanese manga/anime. The influence of these sources is insurmountable. And now an entire generation, who bore witness to the rise in popularity of these artistic outlets, are old enough to call the shots in the publishing industry and are producing mature and engaging material.

Something like a graphic novel, or even a video game, requires the utilization of senses much more than a written novel and implements elements of consideration that are absent from the common piece of fiction. I think that has also contributed to the rise in popularity, as my students, particularly young teenagers, are able to gain more enjoyment from reading graphic novels as they are actively engaging with the stories more so than they would if there was just text on a page. There’s something universal about an image that language alone fails to capture, and a graphic novel, in combination of the two, has become a significant part of our growing globalized consciousness.

Hey, if it is getting both children and adults to engage with their imaginations, then I am really excited about the movement and attention the genre is finally getting!

PWN: When did you first realize that graphic novels were a “thing?”

TARA: I was about 10 or 11 years old when I was first introduced to Japanese cartoons, or anime, in the form of popular shows such as Sailor Moon, Dragon Ball Z, and Gundam. In an effort to get closer to the source, I began my foray into graphic novels through consumption of manga, or Japanese comics, that many of the anime series I revere are based on and inspired from (much like how Marvel looks to the actual comic source material to create their films). The graphic novel or manga I first read in entirety was the apocalyptic cyberpunk epic Battle Angel Alita (known as Gunnm in Japan). From there, I raided libraries and my wallet to build my mental map between titles. As the influence of manga trickled into the American pop-culture consciousness, graphic novels began to influence my own writing, style, and, to a greater extent, my understanding of humanity blossomed.

PWN: What moment in the classroom gets you excited as an instructor?

TARA: I’m having a hard time defining the moment precisely. I am an instructor who finds value in what I am teaching as well as what I learn from teaching. So … perhaps the moment that really affirms my chosen career is witnessing a slight shift in a student’s eyes, a shift from a confused or bored, glossed-over daydream stare to an intense, bullet-pointed fascination and understanding. When a student “gets it” and is encouraged further, passion is created. And from this, a love of life-long learning thrives.

PWN: Why do you write?

TARA: I write because sometimes my brain and mouth trip over each other and the editing process behind the written word is more forgiving.

Tara Tomaino is a Writing Instructor for Project Write Now.