The Universal Writing Prompt: I Remember 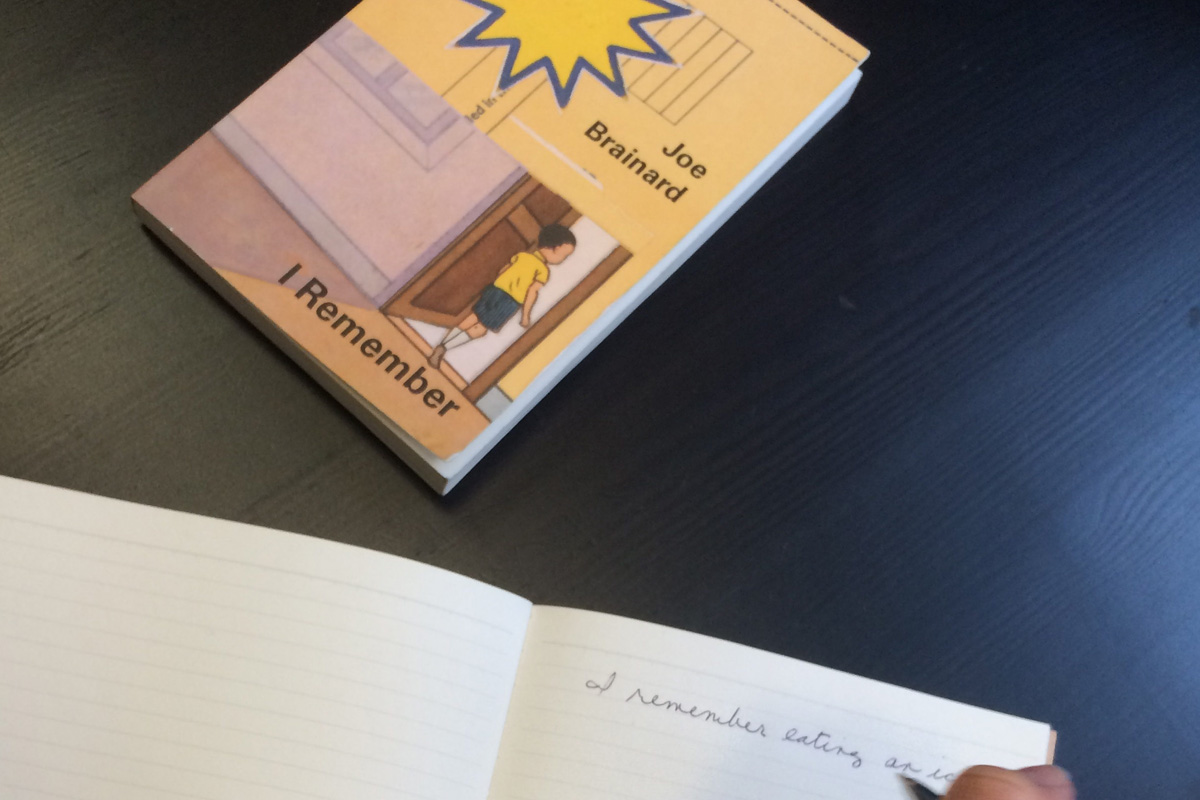 In my third semester of graduate school, I became seriously stuck in my writing. I was avoiding the blank page, afraid that what I wrote would suck and need to be scrapped, or, worse, that I would crack open and spill out something painful. My professor at the time was understanding and told me everything that we at PWN tell our students of all ages: Everyone has a story to tell. Write to find your voice. Write to discover. Do not self-edit while drafting.

Then, I got an email from him:

This one is essential: I Remember, by Joe Brainard

Reading Brainard’s memoir, I discovered if he has something to say about linoleum floors and Oreo cookies dunked in milk, then I too had something important to say. I marveled at how, in a scattered sentence and short-paragraph form, he zoomed in on his own personal moments, and then pulled out to a wider lens of common experiences. The scope was astounding, and his grace and honesty beautiful.

I Remember was one of the first books I brought into Project Write Now. We prompted adult students to write their own “I Remembers,” and since then, almost two years later, we have used the prompt in every workshop we’ve done, with all populations, from ages 7 through adults. What I’ve witnessed from people writing and sharing their “I Remembers” has been transformative.

The sentences from Brainard’s I Remember range from sentimental to banal, heartbreaking to joyous, personal to universal. And this is how people tend to write their own “I Remembers” when they allow their minds to open up and their thoughts to go wherever they may. Try it. Start with, say, a memory about eating an ice cream cone (that may or may not have fallen on your lap), write for 10 minutes, and let your mind hop from memory to memory, each one triggering the next. You’ll be surprised at what will be unlocked for you as a writer, and where you’ll end up.

In a professional development writing workshop with teachers and administration, a principal wrote, “I remember throwing up every day before kindergarten because I didn’t know the language in my school, and didn’t know if I would ever learn it. And I think about that every day when I do my job.”

A husband and wife shared their “I Remembers” and looked at one another in shock when they realized they’d each written the same exact line, word for word: “I remember when we brought our daughter home from the hospital.” I can still remember the looks on their faces, how surprised they seemed in that moment of connection.

A teenager admitted, laughing, “I remember falling off my bike in front of a group of people, and pretending it didn’t happen.”

A 17-year-old said, “I remember getting a free ticket to my favorite football team’s game and giving it to my little brother because he wanted so badly to go. I’ve still never been to a Giants game.”

Once, at a teen arts event, a young woman wrote, “I remember when my mother sold me.” And our hearts stopped.

We’ve even seen people who are opposed to writing open up and wow the other people in the room. This prompt works for everyone, connecting one another in a meaningful way, which is why we have created an event around it called “A Night to Remember.” We’ll be celebrating everyone’s stories. Attendees will have the opportunity to participate but also interact with other storytellers, such as chefs, musicians, artists, photographers, actors, and anyone else who will be at Two River Theater on November 29th.

We’ve invited community members to attend, as well as the poet, essayist, fiction writer, and translator Rod Padgett, who was Joe Brainard’s childhood and lifelong best friend. Padgett is also the author of Joe: A Memoir about Joe Brainard, as well as more than 20 other books.

We hope to see you there and to hear your “I Remembers.”

The Universal Writing Prompt: I Remember