CAPTIVATED: WHAT PWN IS OBSESSED WITH … 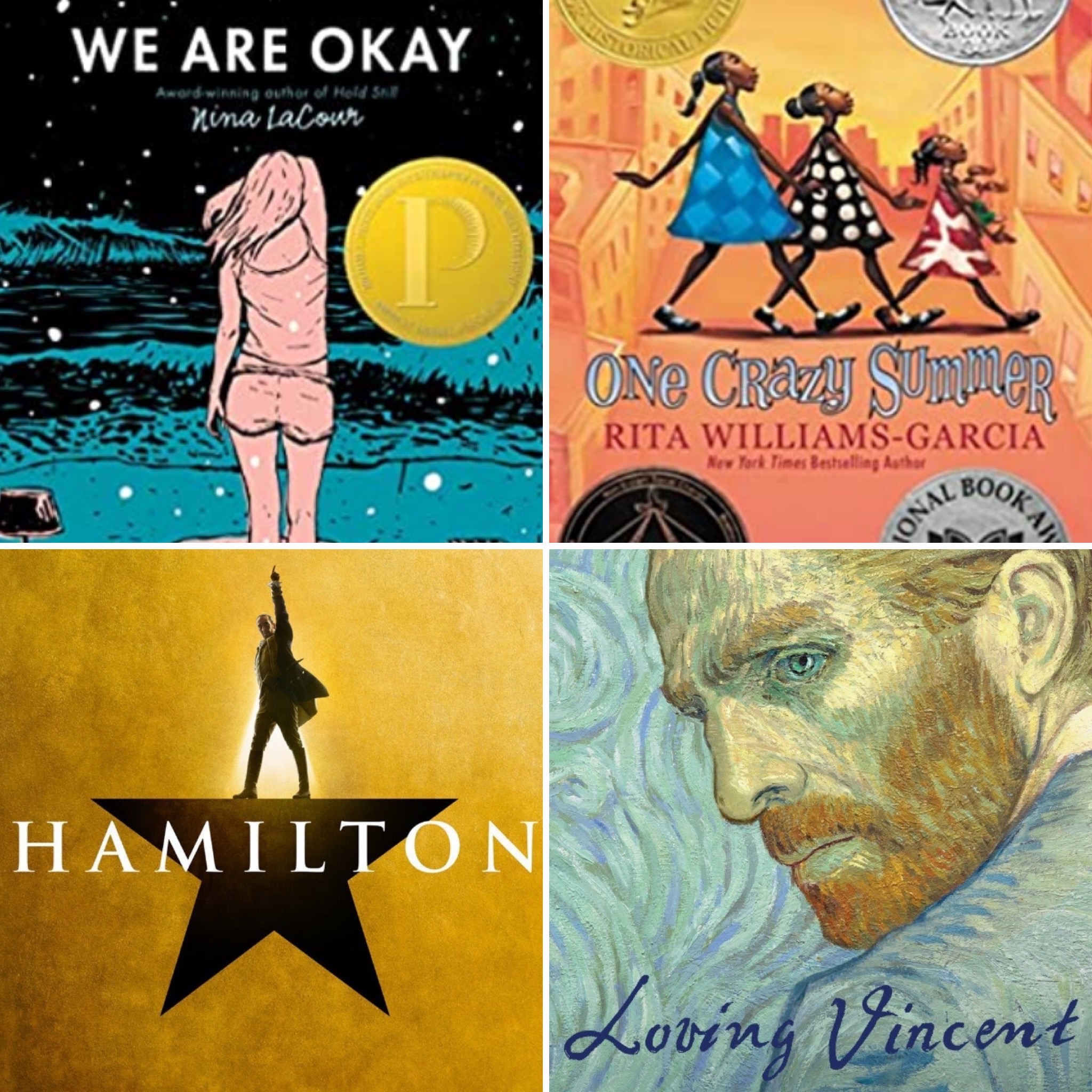 This month, as we figure out what back to school is going to look like, we’ve decided to focus on our creative and brave teen writers. If we need inspiration as the world keeps changing, we need look no further than to the young people around us. Not only can they tip us off as to what’s hot right now, but through their grace, their adaptability, and their activism, we can learn a lot about finding our way through uncertain times.

Every Friday on our Bridge Ink Instagram account, our Teen Ambassadors have been sharing their book, film, and music recommendations.

In this special edition of Captivated, here’s a snapshot of our Teen Summer Recs. You can read the full recommendations here.

Sophia Weiss-Goldner recommends The Perks of Being a Wallflower, by Stephen Chbosky, which she says is one of the most beautifully written, heartfelt, raw, and influential coming-of -age novels she has ever read. “Every time I read this book, I laugh, I cry, and I find myself reflecting on my own life. People of all ages can appreciate and get something out of this truly one-of-a-kind, honest coming-of-age tale.”

Koye Oputa loves We Are Okay, by Nina LaCour. Koye says “We Are Okay enraptures its readers in a tender world of grief, love, and forgiveness. Although it’s an absolutely heart-wrenching book, LaCour’s careful, poetic word choice presents tragedy with such honesty and care that it allows a reader to feel fully immersed in a world of LaCour’s emotions while also feeling suspended by the love and warmth emanating from the book.”

Alex Lindgren recommends One Crazy Summer, by Rita Williams-Garcia. Alex says she liked One Crazy Summer because it was a historical book. “The sisters interact with the social activist group known as the Black Panthers and they realize that they are fighting to stop the injustices that people of color faced in the ’60s and ’70s. If you want to read a good book and learn a little history about important black activist leaders, this book is for you!”

For Nathaly Segura, it’s ’80s music! Among her favorites are “We Built This City,” by Starship, “Take on Me,” by A-ha and “Everybody Wants to Rule the Word,” by Tears for Fears. The latter song “is the epitome of realizing what life is truly about. … It starts off as just another catchy synth-pop and rock song but ends up drawing some thought-provoking connections between freedom and change. It mentions how “nothing ever lasts forever,” which emphasizes the importance of wanting to put your best foot forward and make the most of opportunities that come your way.”

Xander Smith recommends Dracula’s Daughter, directed by Lambert Hiller. “We all know the classic universal films—Bela Lugosi’s Dracula, Boris Karloff’s Frankenstein, and Lon Chaney Jr.’s Wolfman—but I feel that this film has unfortunately been lost to time, and it’s truly a shame because this film is definitely up there as one of the best Monster Mash films. In fact, a lot of horror historians will tell you that it was the last of the classic universal horror films that was actually horror before the movies became campy.”

One of Alexis Giglio’s favorites is Loving Vincent, directed by Dorota Kobiela & Hugh Welchman, a film animated entirely out of real-life oil paintings that tells the story of Vincent van Gogh through the eyes of a man intrigued by the artist’s death. “[This film] features around 65,000 frames of hand-painted artwork in the style of van Gogh, making it the first of its kind. Its message—one of celebrating the art of being alive—is also particularly touching, especially considering the artist in question.”

Megan Froehlich recommends Hamilton, written by Lin Manuel Miranda, which tells the story of Alexander Hamilton’s life through incredible rap and beautiful melodies. “The concept of using hip-hop to explain a founding father’s life story may seem odd, but after listening to the first line delivered by Hamilton’s rival, Aaron Burr, you’ll become instantly hooked. … The word play and rhyme are extremely helpful for poets especially; the character development and plot progression lay a brilliant example for prose writers.”

Feel free to share any comments or writing inspired by our Captivated column with us at info@projectwritenow.org.

CAPTIVATED: WHAT PWN IS OBSESSED WITH …