CAPTIVATED: WHAT PWN WAS OBSESSED WITH IN 2020 … 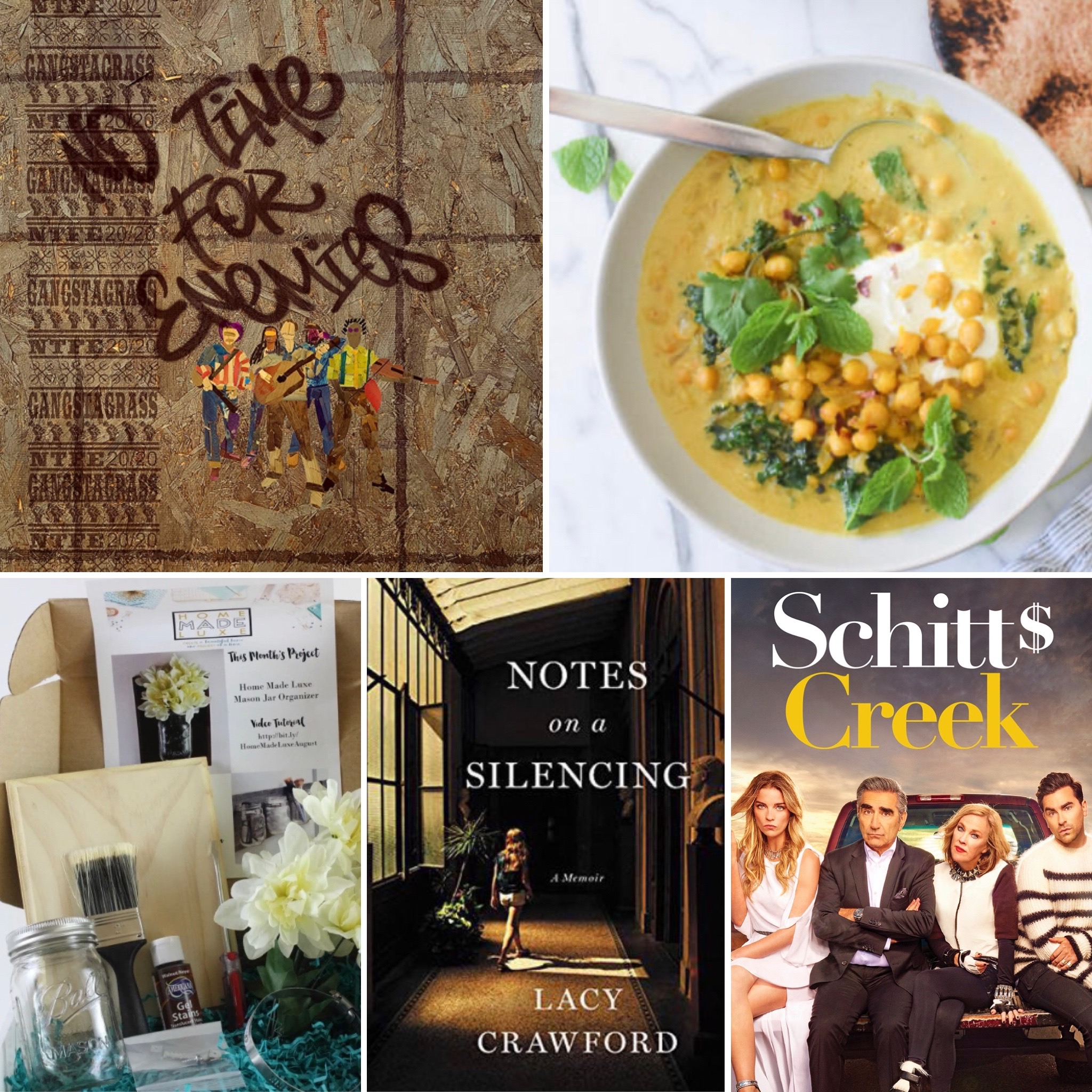 At PWN, we are an optimistic group, but we’re not going to sugarcoat this: 2020 was a challenge. However, despite the events that tested our mettle this year, our classes kept us going. One huge bright spot week after week was our full Zoom classes, where our students showed up to read together, write together, discuss craft, and unite over our most vulnerable and quirky humanity. For that, PWN is tremendously thankful.

So as we close out the year, we asked our instructors what kept them going in addition to seeing their students each week. What did they read, listen to, watch, eat, or do outside of class that kept them engaged and inspired?

As we look to one another for ways to deepen our writing and our appreciation of the world around us, we are grateful to our instructors for sharing what has delighted their senses, encouraged them, or just warmed their souls.

Ray Brunt found some binge-worthy shows to watch including The Queen’s Gambit on Netflix and Little Fires Everywhere on Hulu. “The Queen’s Gambit is a period piece about an orphan girl in the male-dominated world of chess. She is a prodigy, and the show explores her life and how she pierced the glass ceiling by beating a Russian Master in the sixties. The acting was superb, as was the wardrobe and storylines. In Little Fires Everywhere, they took some minor liberties with the storyline but stayed pretty close [to the book] as far as key plot lines and inciting incidents. By adding Kerry Washington to play a character who was not racially identified in the book, it hyped up the tension even more, expanding the themes to race and class as opposed to simply class. It was broken up episodically really well and the acting was of course superb.”

Jennifer Chauhan has been listening to Brené Brown’s podcast Unlocking Us on her daily walks. “Brown invites guests from diverse fields into timely, insightful conversations about the universal experiences of being human. I have found that in almost all of these conversations, there are nuggets of brilliance that can be applied to the writing process. Some of my favorite episodes are ‘Tarana Burke on Being Heard and Seen,’ ‘David Kessler on Grief and Finding Meaning,’ ‘Dr. Vivek Murphy on Loneliness and Connection,’ ‘Ibram X. Kendi on How to Be an Antiracist,’ and ‘Gabby Rivera on Superheroes, Storytelling, and the Joy of Resistance.’ Brown also recently launched her Dare to Lead podcast, which I have also been enjoying. I can thank Brown for all the hours I’ve logged walking this year.”

Mimi Cross has been captivated by the book Anthropology of an American Girl, by Hilary Thayer Hamann. “I wish every 17-year-old American girl could read it, every American woman. The metaphors are absolutely breathtaking. The details of this time and these places—1980s NYC/Montauk/The Hamptons—are stunningly accurate. The main character’s passivity is not treated as a crime. She is an artist and an observer. Evie’s personality is gloriously rich: quirky and unique, and feminine, without apology. The only thing ‘wrong’ with Evie is her naiveté about men, and the way many of their minds work. That said, every single thing Evie does makes sense, and the love story that’s such an important part of this incredible book is almost otherworldly in its beauty.”

Laura Cyphers has been reading Sue Monk Kidd’s novel The Book of Longings for her own pleasure. “I’ve tried to turn off my writer’s brain each night and engross myself in Ana’s world. I had forgotten my own longing for those quiet moments between me and the book I kept hidden under my pillow.”

Gay Norton Edelman told us: “I’m in love with doing yin yoga with a couple of YouTube videos. In yin yoga, you hold a position for three to five minutes. It deeply settles the body/mind and quells anxiety. AND I’m totally in love with my craft-of-the-month club from Home Made Luxe, my hubby’s birthday gift to me in August. Mostly they’re pretty simple and I love getting out of my head and slopping about with paint and glue. I’ve asked him to extend my six-month subscription for my Christmas present.”

Lizbeth Finn completed a year-long certificate program in Happiness Studies, taught by Tal Ben Shahar. “I implemented many of the practices in my day-to-day life. I walked almost daily at the beach or in the woods and practiced sunset therapy, yoga, and journaling. And I got a puppy!”

Jennifer Gaites, on the recommendation of a PWN friend, found Derry Girls about a group of teenagers at a Catholic high school in Northern Ireland in the 1990s. “It is laugh-out-loud funny but is set in a really troubled time in Ireland and so there are moments of surprise and tenderness, and with only two seasons I finished it too quickly! Also, I watched My Octopus Teacher (also based on a PWN recommendation!) and it was so visually stunning. They are amazing animals … that my children are tired of hearing me talk about.”

Courtney Harler began watching Schitt’s Creek. “After a bit of a rough start, I realized that the sitcom could do some really terrific storytelling. The characters are finely drawn, and they evolve so beautifully as the series develops. Like many other fans, I appreciate the show for its sneaky sort of depth and nuance, making me laugh one minute and bringing me to tears the next. Overall, it’s a rare sitcom that can hit so many narrative notes. Oh, and there’s actual singing! Some good, some bad, and some truly ugly, but also some that is truly exceptional, much like this exceptional show.”

Lisa Hartsgrove has been busy this year! “One year ago, on my 31st birthday, I decided to start an Instagram account where I share art I’ve created as well as sentences from my one-sentence-a-day project. (You can follow that IG here: www.instagram.com/spillingmyart.) Since beginning this account one year ago, I have received so much encouragement that I decided to take it a step further. So for my 32nd birthday, I have reopened my Etsy shop, h.Arts. I am selling prints of my original works, reprinted courtesy of Delucia Digital. (You can find me on Etsy here: www.etsy.com/shop/lisahartsgrove.) Reopening my Etsy shop has been a very exciting journey for me!”

Pamela K. Johnson has been making this Spicy Chickpea Stew over the last year. “I was on my way to Zumba class—back when we could go places—and listening to an interview on NPR with a food writer about a recipe that they said was so good. Later I went looking for it online. The ingredients didn’t sound that great to me, but they blended together nicely. Kind of a sum-of-the-parts thing.” [Note: Pamela prefers to use coconut cream to coconut milk, and suggests you follow the recipe’s notations at the bottom regarding quantities.] Sounds perfect for winter!

Greg Phelan told us: “Working on a historical novel this year has given me a welcome excuse to flee the pandemic to be immersed in the early Space program, the Beatles invasion, the civil rights movement, and anything else I could read, watch, or listen to from or about the year 1964. I’ve also been kind of obsessed with my new favorite author, Cormac McCarthy. Using hardly any punctuation, he writes prose that is beautiful, lyrical, punchy, and elemental. And I love his subject matter too: horses and men, and the crushing burden of surviving violence and the passing of time.”

Michele Prestininzi said she’s been watching “way too much Netflix!” (like all of us!). Also a Schitt’s Creek fan, she describes it as “the kind of show that weasels its way into your heart and you wind up loving it more than you thought you would.” She adds that she also “recently watched Turn—a historical fiction series that takes place during the American Revolution. The show is a master class on plotting.”

Jennifer Shields has been obsessed with the 1960s vampire soap opera Dark Shadows. “It is sooo bad it’s good! I love how they fudge their lines and keep going. Sometimes a crew person is caught in a shot. The story line moves and the writing is surprisingly good. I could do without the commercials though. Great diversion from the pandemic.”

Allison Tevald used her library’s app and curbside pick-up to borrow new releases. She highly recommends Notes on a Silencing, by Lacy Crawford. “Crawford’s story is, sadly, an ordinary tale, but she tells it exquisitely. The book is also plot-driven, which made it hard to put down. A huge feat for a memoir.”

Eileen Whitener introduced us to a new music genre: Bluegrass hip-hop! She’s been listening to the band Gangstagrass’s new album, No Time for Enemies. “Full disclosure: I both enjoy listening to Gangstagrass and have to listen to them—my husband is their banjo player! The stuff they’ve been working on in lockdown is very good.”

Feel free to share any comments or writing inspired by our Captivated column with us at info@projectwritenow.org.