Twelve Lit Mags to Get to Know 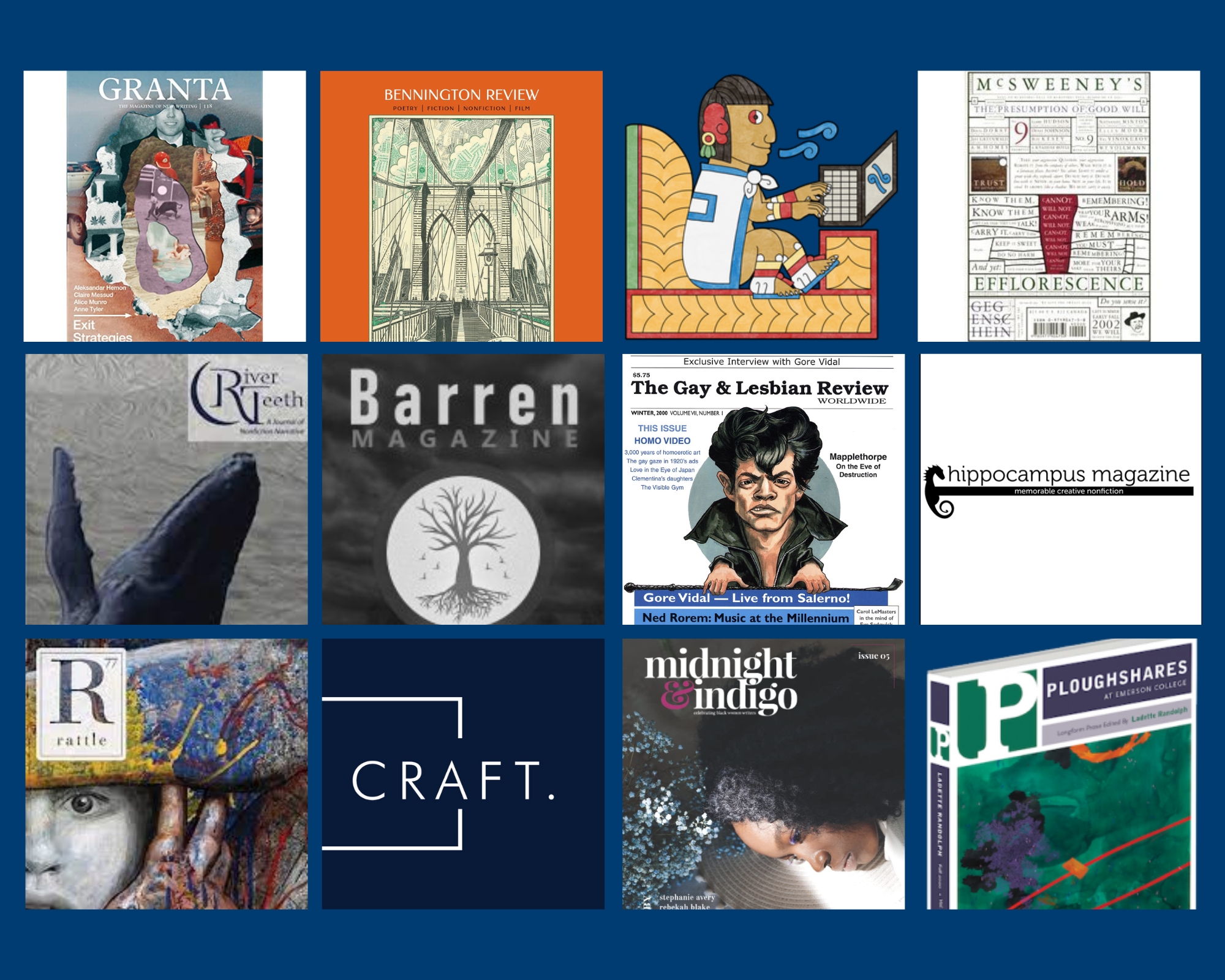 A literary magazine a.k.a lit mag is an online or print periodical that publishes a wide variety of literature including short stories, poetry, and essays, along with literary criticism, book reviews, author interviews, etc.

Here at the PWN’s Writers Institute, we know it can be overwhelming to figure out where to submit your work. That is why, in January 2022, we started a feature in our Writers Institute newsletter called “Get to Know a Lit Mag.”

Our hope was that by learning more about the various lit mags you may find the perfect fit for that poem or flash essay you’ve been wanting to publish.

We’ve compiled our Get to Know a Lit Mag feature here so that you browse through all 12 periodicals.

To learn more about the ins and outs of the lit mag publishing process, register today for Courtney Harler’s How to Submit to Lit Mags workshop, offered virtually on Thursday, January 26, from 7 to 9 p.m. ET.

To receive features such as this and other helpful writing resources and insights directly in your inbox, sign up for our monthly Writers Institute newsletters.

Granta is a literary magazine and publisher based in the United Kingdom. It calls itself “the magazine of new writing.”

This lit mag believes “in the power and urgency of the story, both in fiction and non-fiction, and the story’s supreme ability to describe, illuminate and make real.”

Duotrope ranks Granta among the “Extremely Challenging Publishers” in its database. It notes that writers who have submitted to Granta have also submitted to AGNI, The Sun Magazine, Ploughshares, Guernica, and The Missouri Review.

Granta is currently open for submissions until December 31. They are looking for nonfiction, fiction, and nonfiction proposals. Learn their submission guidelines here.

In their own words: “Bennington Review aims to contribute distinctive style and substance to the national literary conversation through publishing sharp, unexpected, original poetry and prose from a geographically broad and culturally rich spectrum of prominent, up-and-coming, and new voices.”

Published twice a year in print form, Bennington Review is currently open for submission now until January 9, 2023. They aim to respond in three to six months.

Since October is National Hispanic Heritage Month, we are focusing on a Latino literary magazine.

The broad purpose of Somos En Escrito: ​The Latino Literary Online Magazine is to empower Latino writers to practice their art and give exposure to their works. Somos En Escrito is dedicated to providing an outlet to new and established writers in the various fields of literature: fiction, essays, poetry, experimental, and book reviews, written in Spanish and/or English.

Somos En Escrito is currently seeking submissions for poetry and visual art. Submissions are restricted to U.S. Americans of Chicano, Mexican, Puerto Rican, Cuban, and other Hispanic origin. However, the subject matter need not be about Latino or Hispanic topics.

You may have seen a McSweeney’s piece forwarded to you by a friend with the comment, “This is so funny!” McSweeney’s operates a daily humor website called McSweeney’s Internet Tendencies as well as publishes Timothy McSweeney’s Quarterly Concern.

In their own words: “McSweeney’s began in 1998 as a literary journal that published only works rejected by other magazines. That rule was soon abandoned, and since then McSweeney’s has attracted work from some of the finest writers in the country.”

McSweeney’s publishes fiction and nonfiction. See their submission guidelines for Internet Tendencies and their guidelines for the Quarterly Concern.

Because we have memoirs on our mind, this month we are focusing on a journal dedicated to the nonfiction narrative, River Teeth.

In their own words: “River Teeth is a biannual journal combining the best of creative nonfiction, including narrative reportage, essays, and memoir.”

According to Duotrope, River Teeth ranks among the 25 Most Challenging Nonfiction Publishers in its database.

Barren describes itself as “introspective lit” and states: “We revel in the shadow-spaces that make up the human condition, and aim to find antitheses to that which defines us: light in darkness; beauty in ugliness; peace in disarray. We invite you to explore it with us.”

For Pride Month, we are featuring an LGBTQ+ magazine. The Gay & Lesbian Review / Worldwide (The G&LR) is a bimonthly print magazine of history, culture, and politics targeting an educated readership of LGBTQ+ people and their allies. Its mission is to promote equal rights and equality for all sexual and gender minorities, advance the intellectual life of LGBTQ+ people, and educate a broader public on LGBTQ+ topics.

The G&LR‘s print magazine publishes nonfiction, poetry, and essays in a wide range of disciplines as well as reviews of books, movies, and plays. Its website publishes “Here’s My Story” personal narratives and blogs for short essay, op-pieces, and movie reviews.

Submissions are ongoing and are accepted via email. Read their Writers’ Guidelines here.

In their own words: “Hippocampus Magazine is an exclusively online publication set out to entertain, educate, and engage writers and readers of creative nonfiction.”

Hippocampus publishes memoir excerpts, personal essays, reviews, interviews, and craft articles. They offer a $40 honorarium to authors and have two regular submission periods: March 1 through May 31 and September 1 through November 30.

According to Duotrope, work submitted to Hippocampus has also been submitted to the Forge Literary Magazine, River Teeth, Brevity, The Sun Magazine, and AGNI.

In non-publishing news: On August 12-14, Hippocampus is hosting HippoCamp, a conference for Creative Nonfiction Writers in Lancaster, PA.

For National Poetry Month, let’s talk about Rattle, a poetry magazine based in Los Angeles that was founded in 1994.

In their own words: “At Rattle, anything always goes. If a poem is accessible, interesting, moving, and memorable, if it makes you laugh or cry, then it’s the kind of poem that rattles around inside you for years, and it’s our kind of poem.”

Rattle publishes unsolicited poetry and translations. General submissions are free and open year-round. Its annual Poetry Prize offers $15,000 for a single poem to be published in the winter issue of the magazine. The deadline is July 15.

Fun fact: Rattle’s website has a “random” button that will present you with a new poem every time you click it. Happy submitting!

This month, we are featuring the lit mag CRAFT.

In their own words: “Established in 2017 as a literary magazine for fiction, CRAFT expanded in 2020 to publish creative nonfiction as well. We explore how writing works, reading pieces with a focus on the elements of craft, on the art of prose.”

CRAFT is an electronic-only publication. It posts creative work weekly as well as critical pieces including essays on craft and interviews. They are a paying market and do not charge fees for submissions. They are open year-round for submissions and offer several contests. Their Short Fiction Prize contest is currently accepting submissions until May 1.

According to Duotrope‘s statistics, work submitted here was also submitted to Brevity, the Forge Literary Magazine, and Chestnut Review. And Duotrope members who were accepted at CRAFT were also accepted at Boulevard Magazine, West Branch, and Autofocus.

And guess what? Our very own Courtney Harler co-host of PWN’s Debut Review podcast is CRAFT‘s Editor in Chief. Not too shabby!

In honor of Black History month, we are featuring midnight & indigo, a small Black women-owned publisher and literary journal that provides a space for Black women writers.

In their own words: “With an emphasis on short fiction and narrative essays, we exist to make a meaningful contribution to the rich Black literary tradition.”

midnight & indigo publishes two to three multi-author literary journals each year (in print, and as an ebook and/or an audiobook) and one long-form anthology collection (upcoming 2023).

Their calls for journal submissions (short stories and personal essays) are held two to three times per year. The next deadline is April 30 for short story and narrative essay submissions.

Not to toot our own horn, but our very own Shanda McManus, book inc’s Memoir Incubator Peer Artist Leader, was published in midnight & indigo’s Issue No. 3. In her short story “Donte’s Choice,” a young man must decide what he is willing to risk to feel fulfilled.

In a ranking of lit mags by how often their short stories appear in Best American Short Stories, Ploughshares ranks Number 3, which means it’s a Top Tier literary magazine and submissions are extremely competitive.

Ploughshares accept submissions to the journal from June 1 to January 15. Its annual Emerging Writers Contest usually opens up for submissions in March.

Editors try to make a decision within 150 days. According to Duotrope, work submitted to Ploughshares was also submitted to: The Sun Magazine, AGNI, The Missouri Review, Granta, Guernica, and The Gettysburg Review.

Twelve Lit Mags to Get to Know